Recently I received a lot of tagged images of myself shooting the owners of a major US event.
A shoot that has been planned out over months of emails and careful consideration for each of these folks public identity let alone personal privacy if there is such a thing?
I booked time and brought some props.
There was a postponement for the shoot to a later time another day.
Schedules are packed for the owners of of this event and getting them together in one place is a feat all in its self.
I was honoring them as a collective and trying to make an iconic image to go with my personal project.
I would of liked to reveal my images of this group in my own time.
Another photographer whom was not part of my shoot decided to take his own images and post them with no real consideration for my feelings, let along the subjects feelings about the images he "SNAKED" over my shoulders.
I at first thought that this person was fond of me thus posting his images to share a moment about my shoot.
What was I thinking?  I wasn't I found the trappings of flattery and ego only to be fraud with grief.
The reality is that he never asked me how I felt about posting?
He was not invited to be part of my shoot and yet at this event it can be difficult to have a private session.
I often ask all subjects to post and if I were to post and they didn't like it to let me know and I would pull those images pronto.
Public events can be loaded with novice wanna bee shooters.
I am mortified by the numbers of people with cameras shooting over the shoulders of others shooters.
I found this occurring one such evening with Mike Garlington; a seriously talented artist.
I was in disbelief to see a half dozen people behind him snaking his shot that he planned and set up and was shooting.
I watched a bit that I spouted out!
"You all should be shooting the artist. Not his content."
Mike appeared out from under his 4x5 camera.
"I f-----g love you Karen Kuehn."
Some folks like the amateur label.
I have worked hard more than half my life creating content for shots.
To tell stories and be original.
I am seriously professional and respectful of my peers.
To see someone post images of my shoot content with out checking to see if I was ready to share my story is sort of disconcerting.
A bad trend amongst non seasoned shooters.
I did ask this person to remove those images.
I let him know that I felt he was spoiling my reveal.
Is this a very selfish involved move on his part?
Yes he rained on my parade.
We that care call it "Amateur Hour."
If you respect another other photographers:
1. Don't cop shots.
2. Ask the key photographer permission to shoot let alone post.
3. Be original and coordinate your own shoots.
4. When asked to pull images, do it. ( Just don't shoot someone else's shoot)
5. A real human would care to call and say hey I messed up.
The world is so about the moment now and less about heart and depth.
Why call when you can just delete and text and shut off.
Here was an opportunity to be caring and the result is evident.
I did give him a chance to do so and contacted him in private letting him know my feelings.
Last I heard the shots were still up.
Is this an opportunist take?
Is this self absorbed? You tell me!
He un-friend/blocked me on Facebook after contacting him in private.
I did not publicly shame him for his posting.
Yes this is a photo bomb for sure.
As for my images I will post in my time when I get to this project asap.
I also will not publicly post my shots of my subjects without their permissions.
I will  run the selection of images by them first.
I will treat them the way I would like to be treated.
.  People with cameras are not necessary talented let alone photographers.
Anyone and everyone has an I Phone and digital camera now.
It's  shame as the artistry and craft of being a REAL PHOTOGRAPHER is waning.
Maybe the world is so over saturated with images and ease to make it so public that the quality is just all about speed and reveal rather than craft and created from a deeper place with in ones soul?

My advise to new shooters and old.
Don't sneak shots of other peoples shoots.
It's in poor taste.
If you want to be a pro, behave like one.
I'm pretty old fashioned and whatever happen to professional courtesy?
If Annie Leibovitz was doing a shoot for Vanity Fair and I was by chance near her shoot!
I would never snag a shot of her content and post.
It's just all wrong.  And I'm pretty certain she would not want me on set or near without it being pre-arranged.
What is happening in the world around photographs is a strange sense of
ENTITLEMENT.
Here is where the collective consciousness is expanding.
It's this kind of entitlement that divides us rather than bonds us as humans.
With bigger issues in the world I can certainly say this is small mindedness.
But we all have the ability to affect each other in a good way and bad way.
Things can evolve in so many ways to create joyful hearts and support groups, the planet,
mankind and all the idiosyncrasy's  that go along with life sustained.
We are all connected and caring is a great idea when it is mutually reflected.
People think that because they have a camera they can have access to anything with no considerations for the subjects let alone the relationship a shooter may have between their subjects and whatever they may be co creating.
I have honored those folks within my work since 2009.
I earned some sort of respect based on my out put and integrity.
I feel so robbed of the moment to reveal my shots by this man posting his images.
Where is his heart?
Is this all EGO?
Can he make it right?  Yes. Will he?
Who knows?
Five minutes of fame for a feather in his cap.
I would of hoped he would of realized his mistake and rendered it fixed.
What can I say?  I've said my feelings and they didn't account for much as of yet.
Public shooting: is it a dog eat dog world with all those new bee shooters.
I photographed some of my peers this time.
I respect them and their content.
It's a mutual feeling.
Some are pros and some are self labeled amateur.
I aligned myself with a few of the real photographers at this event.
I hold in high regard not only their image making but their professional demeanor.
Pros have edict and don't need another persons feather in their cap.
I create with all my heart and soul.
Respectfully.
Posted by Unknown at 10:55 AM 7 comments: 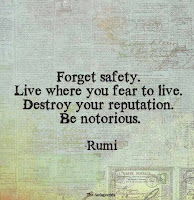 I am a big fan of RUMI
I think we can live fully but I do feel if we don't live and account for one's self than people get hurt.  Don't be self absorbed.
People who play the victim card are pretty much unaware.
100 percent accountable beings get the prize end of day.
The truth
The LOVE
Honesty
Integrity
Question all those you think you should be trusting!
Trust is earned and it is betrayed over and over with those damaged souls.
You can't save lost causes.
You can love your self by avoiding all liability in your relations.
I believe in Safety now more than ever.
I look fear in the face and face it off with integrity.
I am all about my reputation.
(small minded people will always try to destroy what they themselves don't have...)
A great REPUTATION!
Being notorious is just part of life s mysteries.
Posted by Unknown at 10:54 AM No comments:

Awesome is as AWESOME DOES 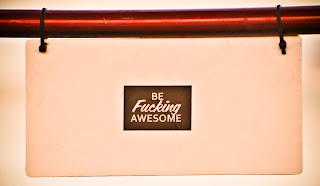 Sticker on Ian Liljeblad mutant vehicle from BM
Posted by Unknown at 10:45 AM No comments: